Lessons in Leadership from a Career at NASA with Donald G. James 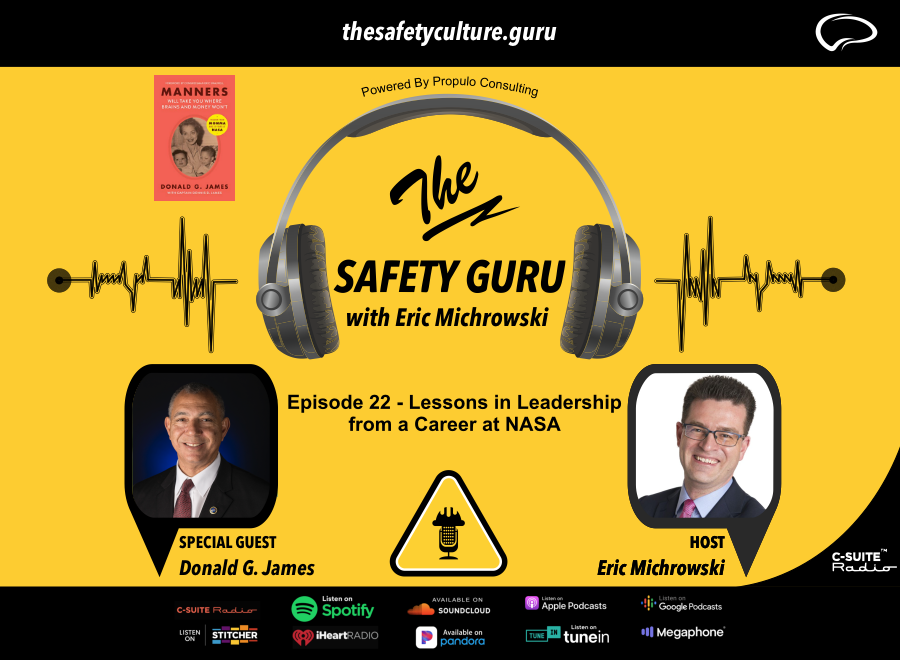 LISTEN TO THE EPISODE

Donald G. James, author of the recently released book Manners Will Take You Where Brains and Money Won’t shares great insights from his lengthy career at NASA. From stories of how the Challenger and Columbia incidents shaped his view of leadership and blind spots, to sharing ideas for leaders to reduce these very blind spots and create environments where people are comfortable speaking up, this is an engaging podcast filled with stories and insights on the importance of Psychological Safety.

The Safety Guru with Eric Michrowski

Donald Gregory James, an executive leader, a manager, a facilitator, a public speaker, a mentor, and author. Donald began his 35-year NASA career as a Presidential Management Intern at NASA’s Goddard Space Flight Center, Maryland in 1982. He transferred to NASA’s Ames Research Center in Mountain View, CA in 1984 where he served in a variety of roles of increasing responsibility and complexity, including Public Affairs, Government & Community Relations and Education.

Donald decided to make a career at NASA after the 1986 Challenger tragedy. Asked to support the post-accident speaking tour of back-up Teacher-In-Space Astronaut Barbara Morgan, Donald was so inspired by the overwhelming love and support for America’s space program – and education – that he realized NASA was a special place where he could make a difference. His journey of public service would take him from being an intern to the senior executive service and member of NASA’s senior leadership team.

James served as Ames’ Education Director from 1999 to 2006. In the Fall of 1996, James co-led the record-setting Open House at Ames attracting over a quarter of million visitors in one day. In early 2006, James worked on the Orion crew spacecraft at NASA Johnson Space Center, where he drafted the program’s first project plan. Later that year, James was named Project Manager for NASA’s (successful) bid to host the International Space University’s 2009 Summer Session Program (ISU- SSP), attracting an ISU SSP best 136 students from over 33 nations, involving over 15 corporate and non-profit partners.

In August of 2014, NASA Administrator Charlie Bolden selected James to serve as the Agency’s Associate Administrator for Education where he led an enterprise comprised of 75 civil servants, over 250 contractors organized to strengthen NASA and America’s future workforce. Under James’ leadership, NASA learner and educator engagement reached over a million people a year. James retired from NASA on March 31, 2017.

James holds a BA in International Relations from the University of Southern California in Los Angeles. He was awarded a three-year graduate fellowship from the National Science Foundation to pursue his MA in International Economic Development from the American University in Washington, D.C. James also studied economics and history at Cambridge University, England, and attended Harvard’s Senior Executive Fellows program. He is the recipient of numerous awards and citations for exemplary service.

His forthcoming book, “Manners Will Take You Where Brains and Money Won’t: Lessons from 35 years at NASA and Momma’s Wisdom” will be released February 2nd. Donald and his wife Tanya live in Pleasanton, California. They have two children, 28 and 25.